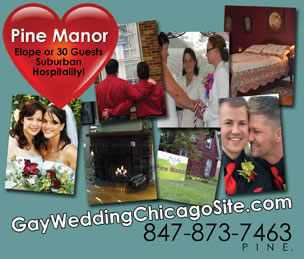 We are all children of the same universe and serving couples according to their unique personality, beliefs and desires was my oath when becoming a wedding officiant. I make people happy one couple at a time. Marriage is an agreement between two people in love and anyone, regardless of their religion, color of their skin, or sex should not be denied these absolute rights.

Economy – We have all heard the economic benefits predicting millions of dollars brought into the state of Illinois from the wedding business, but still our legislature can’t help us balance the budget – And personally in my business hosting the wedding and reception in my home, it would effect everyone in my community – the butcher, the baker and the candle stick maker, down to the grocery store attendant bagging my groceries for the party. I will say this now and I will say this again ‘this is beyond a moral issue’ its just common scenes. Gay marriage is good for everyone in Illinois.

Rev Pamela travels a five state area performing weddings and various other ceremonies, but most of the couples she joins are in her 1920’s Dutch Colonial and backyard garden. Gay Friendly Civil Union Officiant has Intimate wedding packages that include everything from the invitations, flowers, cake, dinner and the band. A perfect venue for a guest list of 30 or a private elopement to the NW Suburbs of Chicago. Gay wedding packages Chicago, Illinois Civil Union Wedding destination.